Thousands of tarantulas are emerging from the ground in the San Francisco Bay Area, looking for mates

Each year, tarantulas emerge in the Rockies and California to look for mates. A spate of warm weather in the Bay Area has extended that mating season.

Thousands of tarantulas are emerging from the ground in the San Francisco Bay Area, looking for mates

John Fowler/Flickr
Every year as the summer ends, male tarantulas engage in a season of courtship. The fuzzy arachnids skitter across roads and parks in the western US, traveling up to a mile in search of mates (even though male tarantulas often meet their demise at the fangs of their spidery lovers).
Typically, tarantula mating season starts in late August and terminates by the second week of fall. But warm, dry weather in northern California has extended this year's mating season there, so residents of the San Francisco Bay Area have been spotting tarantulas this week. Hiking trails in Mount Diablo State Park are reportedly replete with determined males.
"Great time of year. You only get to see it once a year," Sonoma County Reptile Rescue Director Al Wolf told CBS San Francisco.
Searching for that special spider
North American tarantulas (50 species that fall under the genus Aphonopelma) have been known to travel up to 1 mile — a long trek for a spider with legs the length of our fingers — to find a mate. Usually, though, males prefer to stay within a few inches of their burrows.
Once a tarantula finds a potential mate's burrow and fights off any other males for courtship rights, he does something akin to knocking on the front door: Burrows are covered by a silk web, so the suitor taps the web and tries to entice the female outside.
If she acquiesces and comes out, the female tarantula then receives the male's sperm, which the spider has conveniently already deposited on the web. But then she'll eat him if the lovestruck arachnid lingers too long.
"If the female is hungry she may make her anxious suitor her next meal," according to the National Park Service.
Even males who do survive their sexual encounter are typically dead by the start of November. 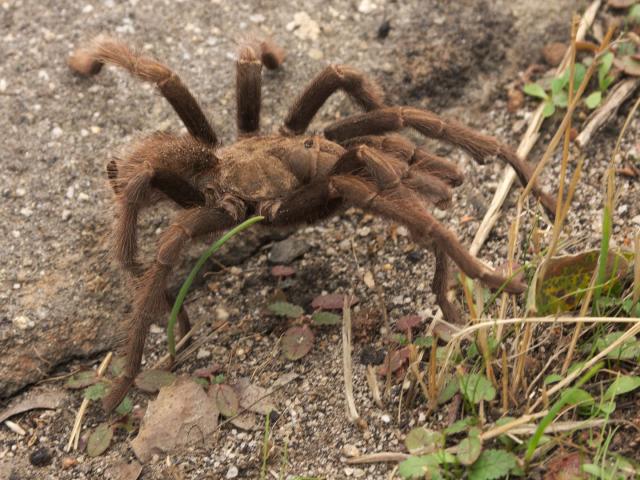 David~O/Flickr
Spotting tarantulas in action
Typically, male tarantulas weigh less than an ounce and grow to lengths of 2.5 inches. They move about solo and prefer traveling at dusk, so spotting the spiders is challenging.
Californians looking to see a tarantula also have an additional challenge this week, since Pacific Gas & Electric has shut off power to 800,000 customers across the state. The move is meant to reduce the risk of sparking wires that could cause fires amid dry, windy conditions.
California isn't the only state to experience an annual tarantula migration. In August, tens of thousands of Oklahoma brown tarantulas moved through the area around La Junta, Colorado in search of females.

Tarantulas, while creepy-looking to some, are not dangerous to people, according to the US Fish and Wildlife Service. The toxins released by their fangs aren't harmful to a creature of human size, though the stinging hairs on their abdomens can cause mild skin and eye irritation.
"It's often the nicest spider of the groups. It's the littler spiders that we always have problems with. These big ones often don't do anything to you," Wolf told CBS.

Mr. P said:
Burrows are covered by a silk web, so the suitor taps the web and tries to entice the female outside.
If she acquiesces and comes out, the female tarantula then receives the male's sperm, which the spider has conveniently already deposited on the web.
Click to expand...

Damn... all these breeding attempts and my males have been putting their sperm in the furrow, what a waste lol. Overall it wasn’t too painful to read.